Wanna see these bad boys up close and personal? Join us Sunday.

The vibrant Edmonton community of Griesbach is proud to be the new home of a towering monument dedicated to the valiant members of the Royal Canadian Air Force: past, present and future.

Ad Astra Plaza will be officially dedicated at a public ceremony scheduled for this Sunday.

As as special treat, the ceremony will feature a low (and thunderous) flypast featuring an impressive procession of aircraft with historical ties to Edmonton: including a Hercules, CF 18s and Griffon tactical helicopters.

The Ad Astra monument is a 10-metre-high stainless steel sculpture representing a “star burst” – an aerobatic manoeuvre familiar to many from military air shows. “Ad Astra” is part of the RCAF motto and means “to the stars.”

“Looking up at this monument inspires dreams,” says former RCAF commander, Bill Buckham. Buckham has been a driving force behind Ad Astor Plaza.

In addition to the monument, the site feature four laser etched granite plaques tell the story of Canada’s airforce from WW1 to present. If you look down at the sidewalks at the plaza and around Roundel Lake, you’ll notice the silhouettes of several well known aircraft associated with the RCAF. 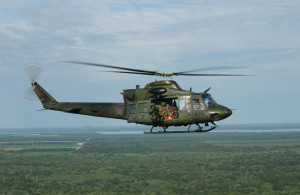 As a former military base, the Village at Griesbach is divided into areas celebrating the various branches of the armed forces. The north west corner around Roundel Lake is themed around the air force. A number of the streets will be named in honour of air personnel selected by Buckham and his team. Several of these veterans are still with us today… and will be attending Sunday’s ceremony.

(You can learn about one of them – Cold War era pilot Bob Morgan – by clicking here for a recent CBC story.)

The plaza and the ceremony that is being planned are first-class all the way. We encourage you to attend and show your appreciation for all those who have served in the RCAF over the past 100 years. And, of course, to see some amazing aircraft sure to awe kids and adults alike!

Below: Bill Buckham supervises the installation. Plaques honouring two airmen who will be in attendence.

To ensure Griesbach remains one of the most desirable, vibrant, safest and engaged communities in Edmonton by representing the needs and interests of Griesbach residents.